Marijuana Use and PTSD among Veterans

Marijuana Use and PTSD among Veterans

Marijuana use has increased over the past decade. In 2013, a study found that 19.8 million people reported using marijuana in the past month, with 8.1 million using almost every day (1). Daily use has increased 60% in the prior decade (1). A number of factors are associated with increased risk of marijuana use, including diagnosis of PTSD (2), social anxiety disorder (3), other substance use, particularly during youth (4), and peer substance use (5). 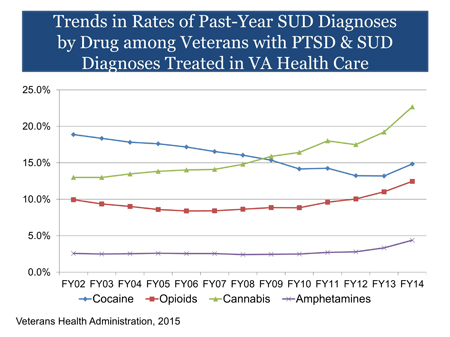 Problems Associated with Marijuana Use

Marijuana use is associated with medical and psychiatric problems. These problems may be caused by using, but they also may reflect the characteristics of the people who use marijuana. Medical problems include chronic bronchitis, abnormal brain development among early adolescent initiators, and impairment in short-term memory, motor coordination and the ability to perform complex psychomotor tasks such as driving. Psychiatric problems include psychosis and impairment in cognitive ability. Quality of life can also be affected through poor life satisfaction, decreased educational attainment, and increased sexual risk-taking behavior (7). Chronic marijuana use also can lead to addiction, with an established and clinically significant withdrawal syndrome (8).

Active Ingredients and Route of Administration

Marijuana contains a variety of components (cannabinoids), most notably delta-9-tetrahydrocannabinol (THC) the primary psychoactive compound in the marijuana plant. There are a number of other cannabinoids, such as cannabidiol (CBD), cannabinol (CBN), and cannabigerol (CBG). Marijuana can vary in cannabinoid concentration, such as in the ratio of THC to other cannabinoids (CBD in particular). Therefore, the effects of marijuana use (e.g., experience of a high, anxiety, sleep) vary as a function of the concentration of cannabinoids (e.g., THC/CBD). In addition, the potency of cannabinoids can vary. For example, the concentration of THC in the marijuana plant can range in strength from less than 1% to 30% based upon strain and cultivation methods. In general, the potency of THC in the marijuana plant has increased as much as 10-fold over the past 40 years (9,10). Recently, cannabis extract products, such as waxes and oils, have been produced and sold in which the concentration of THC can be as high as 90%. Thus, an individual could unknowingly consume a very high dose of THC in one administration, which increases the risk of an adverse reaction.

Marijuana can be consumed in many different forms (e.g., flower, hash, oil, wax, food products, tinctures). Administration of these forms also can take different routes: inhalation (smoking or vaporizing), ingestion, and topical application. Given the same concentration/ratio of marijuana, smoking or vaporizing marijuana produces similar effects (11); however, ingesting the same dose results in a delayed onset and longer duration of effect (12). Not all marijuana users may be aware of the delayed effect caused by ingestion, which may result in greater consumption and a stronger effect than intended.

Marijuana as a Treatment for PTSD

The belief that marijuana can be used to treat PTSD is limited to anecdotal reports from individuals with PTSD who say that the drug helps with their symptoms. There have been no randomized controlled trials, a necessary "gold standard" for determining efficacy. Administration of oral CBD has been shown to decrease anxiety in those with and without clinical anxiety (18). This work has led to the development and testing of CBD treatments for individuals with social anxiety (19), but not yet among individuals with PTSD. With respect to THC, one open trial of 10 participants with PTSD showed THC was safe and well tolerated and resulted in decreases in hyperarousal symptoms (20).

People with PTSD have particular difficulty stopping their use of marijuana and responding to treatment for marijuana addiction. They have greater craving and withdrawal than those without PTSD (21), and greater likelihood of marijuana use during the six months following a quit attempt (17). However, these individuals can benefit from the many evidence-based treatments for marijuana addiction, including cognitive behavioral therapy, motivational enhancement, and contingency management (22). Thus, providers should still utilize these options to support reduction/abstinence.

Treatment providers should not ignore marijuana use in their PTSD patients. The VA/DoD PTSD Clinical Practice Guideline (2010) recommends providing evidence-based treatments for the individual disorders concurrently. PTSD providers should offer education about problems associated with long-term marijuana use and make a referral to a substance use disorder (SUD) specialist if they do not feel they have expertise in treating substance use.

Individuals with comorbid PTSD and SUD do not need to wait for a period of abstinence before addressing their PTSD. A growing number of studies demonstrate that that these patients can tolerate trauma-focused treatment and that these treatments do not worsen substance use outcomes. Therefore, providers have a range of options to help improve the lives of patients with the co-occurring disorders. For more information, see Treatment of Co-Occurring PTSD and Substance Use Disorder in VA.