What Is Moral Injury?

In traumatic or unusually stressful circumstances, people may perpetrate, fail to prevent, or witness events that contradict deeply held moral beliefs and expectations (1). When someone does something that goes against their beliefs this is often referred to as an act of commission and when they fail to do something in line with their beliefs that is often referred to as an act of omission. Individuals may also experience betrayal from leadership, others in positions of power or peers that can result in adverse outcomes (2). Moral injury is the distressing psychological, behavioral, social, and sometimes spiritual aftermath of exposure to such events (3). A moral injury can occur in response to acting or witnessing behaviors that go against an individual's values and moral beliefs.

In order for moral injury to occur, the individual must feel like a transgression occurred and that they or someone else crossed a line with respect to their moral beliefs. Guilt, shame, disgust and anger are some of the hallmark reactions of moral injury (e.g., 4). Guilt involves feeling distress and remorse regarding the morally injurious event (e.g., "I did something bad."). Shame is when the belief about the event generalizes to the whole self (e.g., "I am bad because of what I did.") (5).Disgust may occur as a response to memories of an act of perpetration, and anger may occur in response to a loss or feeling betrayed (6). Another hallmark reaction to moral injury is an inability to self-forgive, and consequently engaging in self-sabotaging behaviors (e.g., feeling link you don't deserve to succeed at work or relationships).

Moral injury also typically has an impact on an individual's spirituality (7). For example, an individual with moral injury may have difficulty understanding how one's beliefs and relationship with a Higher Power can be true given the horrific event the person experienced, leading to uncertainty about previously held spiritual beliefs.

Most research to understand moral injury has been with military Service members and Veterans, as the nature of war and combat create situations where people may have experiences that contradict the values they live by in civilian life. Examples of potentially morally injurious events in the context of war include killing or harming others, when officers have to make decisions that affect the survival of others, when medics are not able to care for all who were harmed, freezing or failing to perform a duty during a dangerous or traumatic event (for example, falling asleep on patrol), failing to report an event that violates rules or ethics, engaging in or witnessing acts of disproportionate violence and feeling nothing or exhilaration while causing harm to or killing others.

Even though most research has been with Service members and Veterans, moral injury can occur in the context of many types of traumatic events (3). Studies have shown moral injury among law enforcement officers and civilians experiencing community violence (8,9). Moral injury among health care workers (10,11) may occur if they have to make difficult decisions related to life and death triage or resource allocation or when they believe they should have been able to save a patient's life but were not able to do so. In the time of a health care crisis, health care workers may witness what they perceive to be unjustifiable or unfair acts or policies that may lead to a sense of betrayal. They also may feel guilty about surviving when others are dying or for infecting people with whom they come into contact. Read more about Moral Injury in Health Care Workers.

There is a great deal of overlap between moral injury and posttraumatic stress disorder (PTSD). Both begin with an event that is often life threatening or harmful to self or others. Guilt and shame are core features of moral injury and are also symptoms of PTSD. The betrayal and loss of trust that could be experienced with moral injury are also common features of PTSD. For example, someone who was assaulted by a loved one may feel betrayed and have difficulty trusting others, whether or not they also suffered moral injury or PTSD.

In regard to differences between the two, PTSD includes additional symptoms such as hyperarousal that are not central to moral injury. Although the core features of moral injury overlap with symptoms and common features of PTSD, it is possible to have moral injury and not meet criteria for PTSD (12). In addition, distress from morally injurious events can lead to different symptom profiles than distress from traumatic events that elicit a fear-based reaction. For example, one study found that perpetration-based events (events where someone perpetrated an act outside of one's values) were associated with more re-experiencing, guilt, and self-blame than were life threatening traumatic events (13). Reporting perpetration is also associated with greater suicidal ideation, even after adjusting for PTSD, depression and substance use (14).

Having moral injury in addition to PTSD is associated with greater PTSD and depression symptom severity and greater likelihood of suicidal intent and behaviors (12,15,16). Studies that have evaluated core features of moral injury (e.g., guilt and shame related to trauma) have also found these to be associated with more severe PTSD, depression, and functional impairment (17,18).

There are several self-report questionnaires to assess moral injury in regard to military and war-related experiences. Some are checklists of potentially morally injurious events (e.g., killing others). Some also ask about reactions common to moral injury such as guilt, shame, and betrayal. Examples of these assessments include the 20-item Moral Injury Questionnaire (MIQ, 19), which assesses exposure and frequency of events Service members may experience in war. A modified version also includes common reactions such as guilt, shame, difficulty forgiving self and others, and withdrawal (20). The 9-item Moral Injury Events Scale (MIES, 21), asks about war-related events that include perpetration by self, by others and betrayal. The 17-item Expression of Moral Injury Scale (EMIS, 22) asks about the experience of self- and other-directed moral emotions related to military experiences.

Another option for measuring moral injury is to assess its core features. For example, the Trauma-Related Guilt Inventory (23) measures feelings and beliefs regarding guilt related to a traumatic event. The Trauma Related Shame Inventory (24) measures shame related to a traumatic event. A benefit of these measures is that they have been validated with non-military samples and the items are not military specific.

It can be difficult for patients to share morally injurious events because of the feelings of guilt and shame associated with them. Therapy may be the first time patients share the story, so they may be concerned about a therapist's reactions. They may wonder "Am I being judged? Is my therapist disgusted with me? Is this too much for my therapist to handle?" It is important for therapists to convey an accepting, non-judgmental, empathic stance. It is also important for therapists to stay alert to their own presumptions about perpetration, morals, values and spirituality. Moral injury may lead patients to believe that they do not deserve to feel better which could negatively affect how much patients engage in and comply with treatment. Self-sabotaging behavior in therapy or other facets of life such as in work or relationships may be clues to a moral injury that has not yet been disclosed. Thus, therapists should assess for such beliefs and address them in therapy.

Surprisingly little is known about whether PTSD treatment reduces moral injury, likely because until recently there have not been assessments appropriate for measuring change in moral injury. Researchers have hypothesized that trauma-focused PTSD treatment such as Prolonged Exposure (PE) and Cognitive Processing Therapy (CPT) can be effective for patients with moral injury (25,26). In PE, patients have the opportunity for emotional processing and to gather context that helps them make sense of the trauma through imaginal and in-vivo exposure. They have the chance to reconnect with important values through in-vivo exposures. CPT is designed to help patients work through beliefs that generally underlie guilt, shame, and betrayal such as that the patient should have done something differently during the trauma. CPT also addresses beliefs about the self, such as "I am unforgivable," and beliefs around betrayal and trust. Thus, both treatments can target the core components of moral injury.

This course explains the relationship between trauma and guilt and reviews how to assess traumatic guilt. Treatment considerations for guilt in Prolonged Exposure (PE) and Cognitive Processing Therapy (CPT) are included. 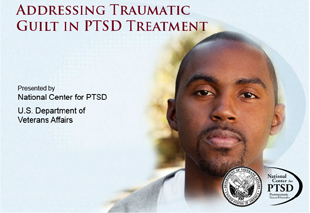 Some studies have shown that trauma-focused PTSD treatment such as PE and CPT effectively reduce trauma-related guilt and shame (e.g., 27,28), although one study found that trauma-related guilt was likely to endure following PE and CPT (29). A possible explanation for the discrepant findings regarding guilt is that traumatic events other than those that cause guilt or moral injury may have been the focus of treatment. It is common for people with PTSD to have experienced more than one traumatic event in their lifetime, so it is possible that the traumatic event(s) processed in therapy were not the ones that involved trauma-related guilt. It is also common for patients to not share their worst traumatic event for fear of being judged, subsequently "testing the waters" with another event. In this case, a patient may not have had the opportunity to gather corrective information that could help to alleviate their guilt. There is also evidence that some individuals may need additional treatment to address moral injury specific concerns (e.g., self-forgiveness) that may require more honed and specialized treatment (30).

There are also new treatments under investigation that specifically target moral injury or its core components. Acceptance and Commitment Therapy adapted for moral injury (31) is a 12-session group treatment focusing on helping patients live in accordance with values. Adaptive Disclosure (32) is a 12-session individual treatment that helps patients process moral injury through imaginary dialogue with a compassionate moral authority, by apportioning blame, making amends and in some versions, self-compassion and mindfulness meditations. The Impact of Killing intervention (33) is a 10-session individual therapy that helps patients explore the functional impact of not forgiving oneself, develop a forgiveness plan (e.g., including letter writing to the individual(s) killed) and helps patients develop an amends plan to honor the values that were violated in the act of killing. It is intended to be a phased treatment delivered after PTSD treatment. Trauma Informed Guilt Reduction Therapy (5) is a 6-session individual therapy that helps patients identify and evaluate beliefs such as hindsight bias and responsibility that contribute to guilt and shame, identify important values including those that were violated during the trauma, and make a plan to live in line with those values going forward. Building Spiritual Strength (34) is an 8-session group therapy that can be led by a chaplain and addresses concerns about relationship with a Higher Power as well as challenges with forgiveness.

Moral injury can occur in reaction to a traumatic event in which deeply held morals or values are violated. The resulting distress may lead to PTSD, depression, and other disorders in which feelings such as guilt, shame, betrayal and anger are predominant, although these feelings may occur in the absence of a formal disorder. Although most research that has been conducted has focused on military Veterans, moral injury can occur outside of the military context.

The attention that moral injury has received over the past decade shows that the concept resonates with individuals who have experienced a morally injurious event as well as with clinicians and researchers. A biopsychosociospiritual model has been recommended as a framework for obtaining the knowledge needed in order to understand and address moral injury in treatment (3).