Exposure to traumatic events such as military combat, physical and sexual abuse, and natural disaster, can be related to poor physical health. Posttraumatic Stress Disorder (PTSD) is also related to health problems.

This page provides information on the relationships between trauma, PTSD, and physical health; specific health problems associated with PTSD; health-risk behaviors and PTSD; mechanisms that help explain how PTSD and physical health could be related; and a clinical agenda to address PTSD and health.

Learn about research findings from both civilian and military populations to illustrate physical health effects of trauma. 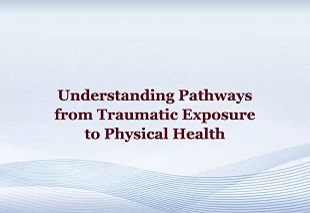 A considerable amount of research has found that trauma has negative effects on physical health. The relationship is clearest when examining self-report of physical health problems and trauma experienced as a result of time in the military, sexual assault, childhood abuse, and motor vehicle accidents. Greater self-report of military trauma, sexual assault, childhood abuse, and motor vehicle accidents is related to greater self-report of health problems. However, when health status is measured by physician diagnosis, associations are not as consistent for military trauma and sexual assault in adulthood.

There is, however, a probable association for survivors of natural disaster. Two recent studies found that reports of childhood abuse and neglect were related to an increase in physician diagnosed disorders including cancer, ischemic heart disease, and chronic lung disease. It is also likely that a relationship exists between the experience of a trauma and an increase in utilization of medical services for physical health problems. In addition, health care costs have been found to be higher among women who report a history of childhood abuse or neglect than among women who report no history of maltreatment as a child.

What Is the Relationship Between Physical Health and PTSD?

A growing body of literature has found a link between PTSD and physical health. Some studies have found that PTSD explains the association between exposure to trauma and poor physical health. In other words, trauma may lead to poor health outcomes because of PTSD. When health problems are measured by self-report, there is a clear association with PTSD for Veterans and active duty personnel, civilian men and women, firefighters, and adolescents. Those who report that they have PTSD symptoms are more likely to have a greater number of physical health problems than those who do not have PTSD.

Existing research has not been able to determine conclusively that PTSD causes poor health. Thus, caution is warranted in making a causal interpretation of what is presented here. It may be the case that something associated with PTSD is actually the cause of greater health problems. For example, it could be that a factor associated with PTSD, such as smoking, is the actual cause of the increased health problems. This is not likely, however, given that we know that PTSD is associated with poor physical health even when behavioral factors such as smoking are controlled.

PTSD may promote poor health through a complex interaction between biological and psychological mechanisms. The National Center for PTSD and other laboratories around the world are studying these mechanisms. Current thinking is that the experience of trauma brings about neurochemical changes in the brain. These changes may have biological, as well as psychological and behavioral, effects on one's health. For example, these neurochemical changes may create a vulnerability to hypertension and atherosclerotic heart disease that could explain in part the association with cardiovascular disorders. Research also shows that these neurochemical changes may relate to abnormalities in thyroid and other hormone functions, and to increased susceptibility to infections and immunologic disorders associated with PTSD.

The psychological and behavioral effects of PTSD on health may be accounted for in part by comorbid depressive and anxiety disorders. Many people with PTSD also experience depressive disorders or other disorders. Depressed individuals report a greater number of physical symptoms and use more medical treatment than do individuals who are not depressed. Depression also has been linked to cardiovascular disease in previously healthy populations and to additional illness and mortality among patients with serious medical illness. PTSD also may be related to poor health through symptoms of comorbid anxiety or panic. The evidence linking anxiety to cardiovascular morbidity and mortality is quite strong, but the mechanisms are largely unknown.

Hostility, or anger, is another possible mediator of the relationship between PTSD and physical health. It is commonly associated with PTSD and decades of research on the health risks associated with the Type A behavior pattern have isolated hostility as a crucial factor in cardiovascular disease. PTSD and poor health also may be mediated in part by behavioral risk factors for disease such as smoking, substance abuse, diet, and lack of exercise. Little is known about how coping and social support relate to health in PTSD, but it is likely that both play important roles. Further research is needed to better understand these potential protective factors.

What Specific Health Problems Are Related to PTSD?

After controlling for risk factors such as alcohol consumption, weight, current substance abuse, and smoking, in addition to controlling for current medication use, PTSD was found to be associated with nonspecific ECG abnormalities, atrioventricular conduction defects, and infarctions. Because the PTSD group in this study included only those Veterans with severe PTSD, it is important to interpret this study with caution. It is unknown whether men with less severe PTSD would show the same ECG abnormalities.

It is also important to be cautious about generalizing the findings in this study since there have been no studies specifically evaluating cardiovascular morbidity and PTSD in women. The gastrointestinal and musculoskeletal systems have also been shown to be associated with PTSD, but the relationship of PTSD to these two systems has not been as extensively researched as the relationship between PTSD and the cardiovascular system. The majority of the studies that have been conducted have gathered information about Veterans, but a study of civilian young men and women found that there is a relationship between gastrointestinal symptoms and PTSD. Similarly, researchers found that PTSD was related to musculoskeletal symptoms among male firefighters. Additional research is needed to learn more about how these and other bodily system troubles may be related to PTSD.

What Is the Agenda for Clinical Practice?

One agenda for clinical practice is for mental-health workers to increase collaboration with primary and specialty medical care professionals in order to better address this relationship between PTSD and health problems. Medical personnel need to become more aware of the potential harmful effects trauma and PTSD can have on health. Specifically, it is important to screen for PTSD in medical settings. Studies of patients seeking physical-health care show that many have been exposed to trauma and experience posttraumatic stress but have not received appropriate mental-health care. In answer to this problem, it might be useful to integrate PTSD treatment services with medical care services.