Research Findings on PTSD and Violence

Research Findings on PTSD and Violence

Individuals with PTSD are not dangerous. Although PTSD is associated with an increased risk of violence, the majority of Veterans and non-Veterans with PTSD have never engaged in violence. When other factors like alcohol and drug misuse, additional psychiatric disorders, or younger age are considered, the association between PTSD and violence is decreased.

How Is Violence Defined?

When reviewing research or media reports about violence and PTSD, it is important to pay close attention to how violence is defined. Milder forms of aggression such as slapping, threatening to throw something, or pushing have sometimes been labeled as violence. Similarly, criminal behavior has sometimes been used interchangeably with violence even though most criminal behavior is non-violent. Including these behaviors in measures of violence falsely inflates reported rates of violence among people with and without PTSD.

Assessing and Reducing Violence Risk in Veterans with PTSD

This PTSD 101 online course describes an evidence-based approach for improving clinical assessment and risk management of violence in Veterans with PTSD. 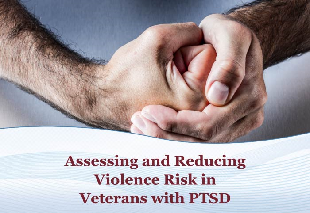 There have been no comparable studies of PTSD and violence in other Veteran cohorts. However, a large epidemiological study of Vietnam and Vietnam-era Veterans that was conducted in the mid-1980s examined intimate partner violence (ranging from slapping and pushing to using a knife or gun), and found that 33.0% of Veterans with PTSD compared to 13.5% of those without PTSD reported intimate partner violence in the past year (1).

Interpreting Findings on the Relationship Between PTSD and Violence

The data showing that the prevalence of violence among individuals with PTSD is 7.5% in the US population and 19.5% in post-9/11 Veterans suggest that the association between PTSD and violence is especially strong in this Veteran cohort. However, to understand these findings, it is important to consider that post-9/11 Veterans are relatively young (median age = 34) and that younger age is associated with increased risk of violence (2-4). For example, in the National Comorbidity Survey of the US general population, the prevalence of violence in the past year was 32.7% among men between the ages of 25-34 but only 1.3% among men aged 35-44 (2). Findings like these suggest that age and perhaps other demographic characteristics need to be considered when comparing the post-9/11 cohort with non-Veterans or with Veterans of other eras.

Although PTSD is associated with increased risk of violence, most people with PTSD have never engaged in violence. Research suggests that when risk and protective factors correlated with PTSD are considered, the association between PTSD and violence diminishes (2,3). Consequently, it is important to consider a wide array of risk factors in addition to PTSD in order to understand the relationship between PTSD and violence.

Learn more about Assessing Risk of Violence in Individuals with PTSD.