The Relationship Between PTSD and Suicide

The Relationship Between PTSD and Suicide

This article explores the relation between PTSD and suicide and provides information that helps with understanding suicide.

Know about the suicide warning signs:

While helping a suicidal person can be a difficult process, remember that the assistance you provide could save someone's life. If you think someone may be suicidal, you can directly ask him or her. Contrary to popular belief, asking someone if they are suicidal will not put the idea in their head.

Often the most difficult part of obtaining treatment is the initial call to a mental health professional. It is usually easier for a suicidal individual to accept professional help if they have assistance with this part of the process. For help making referrals see Get Help in a Crisis.

It is challenging to determine an exact number of suicides. Many times, suicides are not reported and it can be very difficult to determine whether or not a particular individual's death was intentional. For a suicide to be recognized, examiners must be able to say that the deceased meant to die. Other factors that contribute to the difficulty are differences among states as to who is mandated to report a death, as well as changes over time in the coding of mortality data (1).

Data from the National Vital Statistics System, a collaboration between the National Center for Health Statistics of the U.S. Department of Health and Human Services and each US state, provides the best estimate of suicides (2). Overall, men have significantly higher rates of suicide than women. This is true whether or not they are Veterans (3). For comparison:

A body of research indicates that there is a correlation between many types of trauma and suicidal behaviors. For example, there is evidence that traumatic events such as childhood abuse may increase a person's suicide risk (4,5). A history of military sexual trauma (MST) also increases the risk for suicide and intentional self-harm, suggesting a need to screen for suicide risk in this population (6).

Importance of combat exposure in Veterans

Though considerable research has examined the relation between combat or war trauma and suicide, the relationship is not entirely clear. Some studies have shown a relationship while others have not (1). There is strong evidence, though, that among Veterans who experienced combat trauma, the highest relative suicide risk is observed in those who were wounded multiple times and/or hospitalized for a wound (7). This suggests that the intensity of the combat trauma, and the number of times it occurred, may influence suicide risk in Veterans. This study assessed only combat trauma, not a diagnosis of PTSD, as a factor in the suicidal behavior.

Considerable debate exists about the reason for the heightened risk of suicide in trauma survivors. Whereas some studies suggest that suicide risk is higher among those who experienced trauma due to the symptoms of PTSD (8-10), others claim that suicide risk is higher in these individuals because of related psychiatric conditions (11,12). However, a study analyzing data from the National Comorbidity Survey, a nationally representative sample, showed that PTSD alone out of six anxiety diagnoses was significantly associated with suicidal ideation or attempts (13). While the study also found an association between suicidal behaviors and both mood disorders and antisocial personality disorder, the findings pointed to a robust relationship between PTSD and suicide after controlling for comorbid disorders. A later study using the Canadian Community Health Survey data also found that respondents with PTSD were at higher risk for suicide attempts after controlling for physical illness and other mental disorders (14).

Some studies that point to PTSD as a precipitating factor of suicide suggest that high levels of intrusive memories can predict the relative risk of suicide (9). Anger and impulsivity have also been shown to predict suicide risk in those with PTSD (15). Further, some cognitive styles of coping such as using suppression to deal with stress may be additionally predictive of suicide risk in individuals with PTSD (9).

PTSD and suicide risk in Veterans

Other research looking specifically at combat-related PTSD in Vietnam era Veterans suggests that the most significant predictor of both suicide attempts and preoccupation with suicide is combat-related guilt (16). Many Veterans experience highly intrusive thoughts and extreme guilt about acts committed during times of war. These thoughts can often overpower the emotional coping capacities of Veterans. With respect to OIF/OEF Veterans, PTSD has been found to be a risk factor for suicidal ideation (17). Subthreshold PTSD also carries risk. A recent study found that among OIF/OEF Veterans, those with subthreshold PTSD were 3 times more likely to report hopelessness or suicidal ideation than those without PTSD (18).

This course reviews the factors of suicidal self-directed violence among Veterans with PTSD. It provides methods of tailoring risk assessment and intervention in the context of PTSD evidence-based treatment. 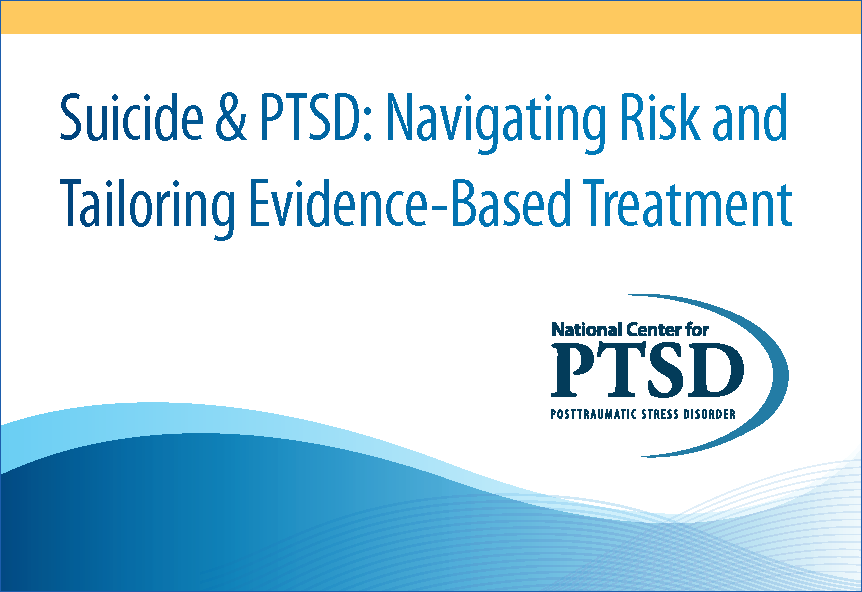 Current practice guidelines for treatment of PTSD indicate that trauma-focused therapies are not recommended for individuals with "significant suicidality" (19,20). Because "suicidality" is a vague term and there is no guidance for what significant suicidality means, we interpret this recommendation to pertain to actively suicidal patients, or those in an acute clinical emergency for whom suicidality should be addressed without delay. Providers must therefore use clinical judgment prior to initiating and throughout trauma-focused therapy.

Individuals with PTSD who present with intermittent but manageable suicidal thoughts may benefit from trauma-focused therapy. Two effective treatments for PTSD, Cognitive Processing Therapy (CPT) and prolonged exposure (PE) have been shown to reduce suicidal ideation. A recent study that randomized women who experienced rape into CPT or PE treatment found that reductions in PTSD symptoms were associated with decreases in suicidal ideation throughout treatment. The reductions were maintained over a 5-10 year follow-up period. The effect of PTSD treatment on suicidal ideation was greater for women who completed CPT (21). Further research is needed to provide additional evidence in other populations. Suicide as a traumatic event

Researchers have also examined exposure to suicide as a traumatic event. Studies show that trauma from exposure to suicide can contribute to PTSD. In particular, adults and adolescents are more likely to develop PTSD as a result of exposure to suicide if one or more of the following conditions are true: if they witness the suicide, if they are very connected with the person who dies, or if they have a history of psychiatric illness (22-24). Studies also show that traumatic grief is more likely to arise after exposure to traumatic death such as suicide (25,26). Traumatic grief refers to a syndrome in which individuals experience functional impairment, a decline in physical health, and suicidal ideation. These symptoms occur independently of other conditions such as depression and anxiety.

VA developed fact sheets to share with family members of Veterans who have made a suicide attempt. Products include guides for talking about a suicide attempt with children and are available in Spanish. Although these resources were created with military families in mind, the material includes resources and information that may be useful for civilians as well.