Demographic patterns across the globe are changing, and older people constitute a growing proportion of the population. Although many older adults enjoy well-being and satisfaction in later years, some experience psychiatric and mental health difficulties. A topic of particular significance to professionals working with older adults, both Veteran and non-Veteran, is the understanding, assessment, and treatment of posttraumatic stress, as posttraumatic stress symptoms can emerge or re-emerge late in life.

Age-related factors can interact with psychiatric symptoms and carry implications for research and clinical care. For clinicians, see PTSD Assessment and Treatment in Older Adults for recommendations.

There are a number of reasons why symptoms of PTSD can increase with age. Both chronological age (cohort effects of birth-year groupings) and developmental processes of aging impact the experience of PTSD. For instance:

This course reviews the incidence and prevalence of PTSD in older adults and describes the role of aging and cognitive impairment among older patients. 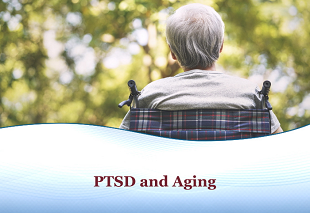 In the general population, approximately 70% to 90% of adults aged 65 and up have been exposed to at least one potentially traumatic event during their lifetime (2). Gender differences exist in regard to trauma exposure. Based on a community sample of older adults, about 70% of older men reported lifetime exposure to trauma; older women reported a lower rate, around 41% (3). This research attributed the gender differential to combat exposure (3).

Prevalence of PTSD in older adults

Trauma and PTSD among older Veterans

Much of the research on PTSD in older adults has been conducted with older Veterans. For many older Veterans, especially combat Veterans, memories of wartime experiences can be upsetting long after completion of military service. Compared to the general population, older Veterans have higher rates of both lifetime trauma exposure and PTSD symptomatology due to combat and warzone-related exposures.

Estimates differ depending on the population being assessed; among psychiatric treatment-seeking older Veterans, PTSD estimates are found to range from 37% to 80% (13). Richardson et al. (2010) provided a thorough discussion of reasons for discrepant prevalence estimates, some of which include measurement strategies, sampling, inclusion/exclusion of DSM-IV impairment criterion, differences in time of exposure, assessment intervals, recall bias, and differences in combat experiences (7).

Trauma and PTSD among older women in the community

Although there is a growing body of research examining the effects of traumatic events more frequently experienced by women, such as rape and domestic violence, older women have often been underrepresented in previous studies. More recent research has assessed the longer-term, lifecourse consequences of such interpersonal traumas, as well as the prevalence and nature of PTSD in older women. For example:

Findings should be considered within the context of cohort effects and gender role patterns. It is important to recognize that the role of women in multiple domains has - and continues to - change over time. For example, there are increasing numbers of women participating in the general labor force and the military than in the past. These changes may affect both the prevalence of interpersonal trauma and psychological sequelae in current and future cohorts of older women.

Differences in PTSD Between Older and Younger Adults

The available research suggests that experiences of traumatic events and subsequent reactions may differ between younger and older adults (and Veterans). There is also evidence to suggest that age at trauma exposure may play a role in subsequent symptomatology.

PTSD is less prevalent in older Veterans than in younger Veterans. Older Veterans report more somatic complaints such as appetite, sleep, or memory problems and fewer PTSD symptoms (especially arousal and numbing symptoms); they also report less depression, hostility, and guilt than younger Veterans (18, 19). Older adults who experienced trauma later in life report more avoidance, sleep problems, and hyperarousal than younger adults (20). Some of the differences in symptom presentation may be partially explained by selective mortality. For example, research in Veteran samples shows that some Veterans with more severe symptoms died before reaching older age (21).

Cohort factors also explain some differences. Older adults may be less likely to identify problems from a psychological framework. For example, older Veterans may attribute problems to more proximal issues and to the aging process, and not relate symptoms to events that occurred long ago (22). It is also possible that trauma history and posttraumatic stress symptoms are often overlooked in older adults because PTSD is a relatively new disorder within the diagnostic system, so older adults who were exposed to traumatic events earlier in life and had symptoms in the aftermath of exposure were not identified (23).

In general, PTSD often co-occurs with physical or other psychiatric conditions. Of particular concern are: substance use disorders, major depression, post-concussive symptoms (mild TBI), and chronic pain (24). Furthermore, aging is associated with increased risk of physical and mental health complications. Thus, among older adults, there are several major areas in which comorbidity with PTSD is commonly observed:

Researchers at VA Boston are looking into a possible late-life process that may be a consequence of combat exposure earlier in life. This phenomenon has been termed Late-Onset Stress Symptomatology (LOSS) and refers to the development of increased thoughts and reminiscences about, and emotional responses to, one's wartime experiences. This process occurs in the context of losses associated with aging, such as retirement, loss of loved ones, and increased health problems, and can develop in Veterans who have otherwise functioned well throughout their adult lives (34, 35).

In contrast to PTSD, LOSS is less associated with clinically significant distress and is more related to normative life stressors (such as concerns about retirement) and to older Veterans’ search for meaning and growth in late life. LOSS may be more related to subthreshold or partial PTSD than to clinically significant PTSD (36). Although LOSS has only been studied with combat Veterans, these concepts may also apply to the general population of aging survivors of early life trauma.

Other Resources on Aging and PTSD

Download and share this booklet with your clients. The challenges faced later in life as a result of PTSD are discussed including effective treatment. English | en Español (PDF) 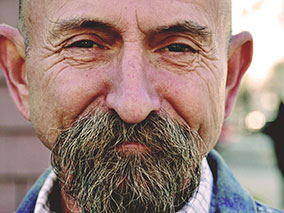 Author Note: SHARP is co-directed by Avron Spiro, PhD and Eve Davison, PhD, and is coordinated by Anica Pless Kaiser, PhD. SHARP is supported by the Behavioral Science Division of the VA National Center for PTSD and the Massachusetts Veterans Epidemiology Research and Information Center (MAVERIC), VA Boston Healthcare System.