How Common is PTSD in Women?

How Common is PTSD in Women?

Trauma is common in women; five out of ten women experience a traumatic event. Women tend to experience different traumas than men. While both men and women report the same symptoms of PTSD (hyperarousal, reexperiencing, avoidance, and numbing), some symptoms are more common for women or men. 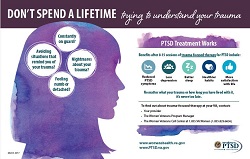 Most early information on trauma and PTSD came from studies of male Veterans, mostly Vietnam Veterans. Researchers began to study the effects of sexual assault and found that women's reactions were similar to male combat Veterans. Women's experiences of trauma can also cause PTSD. This finding led to more research on women's exposure to trauma and PTSD.

What Happens after Trauma

After a trauma, some women may feel depressed, start drinking or using drugs, or develop PTSD. Women are more than twice as likely to develop PTSD than men (10% for women and 4% for men). There are a few reasons women might get PTSD more than men:

Why Are Some Women at Higher Risk for PTSD?

Not all women who experience a traumatic event develop PTSD. Women are more likely to develop PTSD if they:

There are good treatments for PTSD. However, not everyone who experiences a trauma seeks treatment. Women may be more likely than men to seek help after a traumatic event. At least one study found that women respond to treatment as well as or better than men. This may be because women are generally more comfortable sharing feelings and talking about personal things with others than men.

Women in the Military

Women in the military are at high risk for exposure to traumatic events, especially during times of war. Currently, about 15% of all military personnel in Iraq are women. Although men are more likely to experience combat, a growing number of women are now being exposed to combat. Women in the military are at higher risk for exposure to sexual harassment or sexual assault than men. Future studies are needed to better understand the effects of women's exposure to both combat and sexual assault.

What is PTSD? Whiteboard video