PTSD Guideline Overview
The Veterans Affairs and Department of Defense Clinical Practice Guideline for the Management of Posttraumatic Stress Disorder and Acute Stress Disorder was revised in 2017 to provide the latest information and assist clinical decision making in all aspects of a patient-centered care approach.18 A rapidly growing body of research has led to new or refined strategies to manage and treat patients with PTSD. The use of a shared decision making process is encouraged where the patient and provider together review treatment options and compare benefits and harms of each before selecting the option that best meets the patient's needs.

Shared decision making is an approach in which providers and patients communicate together using the best available evidence to make decisions.

An accurate diagnosis and assessment using either a clinical interview or structured diagnostic interview is an essential first step to correctly identify patients with PTSD and ensure they receive appropriate treatment. Brief questionnaires such as the PTSD Checklist (PCL-5) can be used to assess symptom severity and monitor treatment response.

A major change in the 2017 guideline is there is now a recommendation to use specific trauma-focused treatments over medications or other psychotherapies, which are both recommended as second line.

Other manualized protocols that have sufficient evidence to recommend use are:

The guideline also recommends that the presence of comorbid disorders not prevent patients from receiving the guideline-recommended treatments.

For those patients who choose not to engage in or are unable to access trauma-focused psychotherapy and opt for medication treatment, the use of the specific antidepressants as monotherapy is recommended: 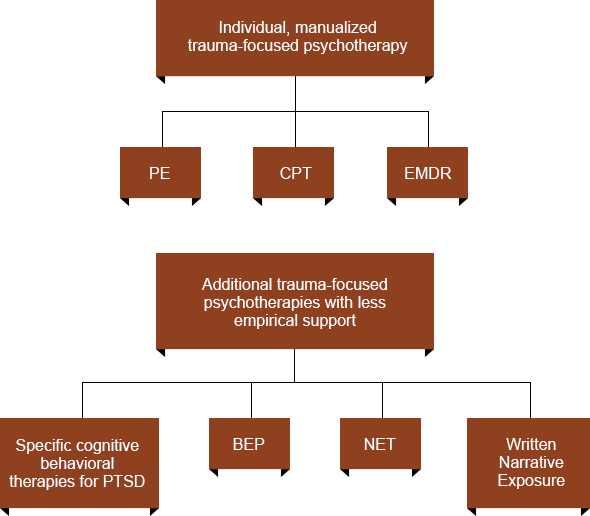 There is a large group of medications and substances recommended against for PTSD due to low quality of evidence and risk of potential harms. That group includes:

It is important to avoid use of benzodiazepines and atypical antipsychotics alone or in combination with other medications for treatment of PTSD because the risk and harms associated with these medications exceed their proven therapeutic benefit for PTSD.18, 21,22
Benzodiazepines
Atypical Antipsychotics
Despite recommendations against their use in treating PTSD, benzodiazepines and atypical antipsychotics continue to be prescribed in patients with PTSD. In VA, clinicians prescribe benzodiazepines to a third of Veterans with PTSD and do so more often in rural Veterans.23,24 Though prescribing clinicians generally agree with practice guidelines that discourage harmful medication use in PTSD, often they do not taper patients off because tapering is too time-intensive or because the patients appear stable.25 There is also a common dilemma in balancing treatments the patient thinks are useful with science and best practice.
Tools and guidance to assist with benzodiazepine education and tapering are available.
When helping a patient already taking harmful drug combinations, it is important to address tapering in a collaborative way, using shared decision making (discussed above).26

There is another large group of medications where the evidence is insufficient to recommend for or against their use. A significant change in the revised 2017 guideline is seen regarding the use of prazosin. The current recommendation suggests against prazosin for global symptoms of PTSD based on lack of efficacy and insufficient evidence to recommend as mono- or augmentation therapy for nightmares.

Despite considerable interest in alternatives to either psychotherapy or medication for the treatment of PTSD, there is currently insufficient evidence to recommend the majority of somatic therapies or complementary and integrative treatments including any animal-assisted therapy.
Back to top